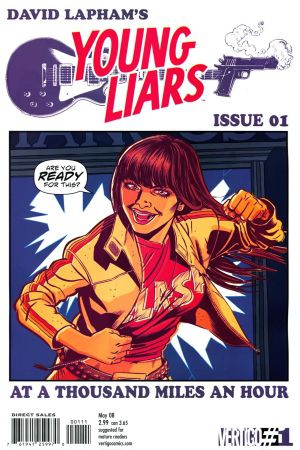 Indie comics auteur and SILVERFISH creator David Lapham hasn't embarked on a monthly series since STRAY BULLETS, his magnum opus that garnered industry awards and international acclaim. Now Lapham's back with YOUNG LIARS, his first full-color monthly series, about a group of misfits and their desperate attempt to salvage their crushed dreams. At the core of YOUNG LIARS is the disturbing relationship between Danny Noonan, a habitual liar and crap guitar player from Texas, and Sadie Dawkins, the object of his desire. Sadie was a poor little rich girl until a bullet lodged in her brain turned her into an adrenaline junkie who only listens to Danny. But who shot Sadie only part of the mystery that drives YOUNG LIARS, from the twisted club scene of lower Manhattan to absurdist hijinx on the high seas. And from the hot shores of Ibiza to the haunted castles of Spain, Danny, Sadie and their entourage of losers will run from poorly disguised assassins, demented billionaires, and psychotic midgets — not to mention each other — in an absurd quest to get rich and famous. Or kill each other trying. YOUNG LIARS will provide relentless action, suspense, sex and murder in the way that only David Lapham can deliver.