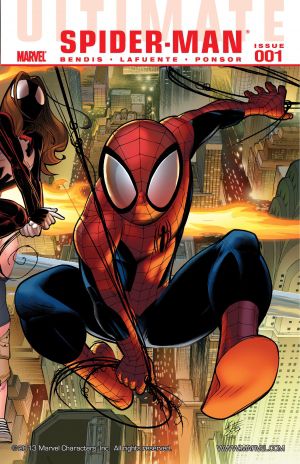 Ultimate Comics Spider-Man Volume 1 (and continued Ultimate Spider-Man Volume 1) A successor to one of the most popular comic book series of the last decade; Ultimate Spider-Man. This series was a continuation of Ultimate Spider-Man and started after the events of Ultimatum and Ultimatum: Spider-Man - Requiem. Almost ten years ago, Marvel launched the Ultimate line, a reinvention of the Marvel Universe that defied the odds and every expectation. Today, it happens again. This new chapter in the life of the teenaged webslinger picks up in the aftermath of Ultimatum and completely redefines the status quo of Spider-Man for the next generation. With a new supporting cast, new villians and maybe even a new Spider-Man, this new chapter will keep you guessing month after month. You have never seen Spider-Man like this before! The series originally started with a new number 1, but returned to it's original numbering following issue 15, with issue 150. After issue 160, the series ended and was replaced with a mini-series named Ultimate Fallout before Ultimate Comics Spider-Man Vol.2 started, starring the new Spider-Man.