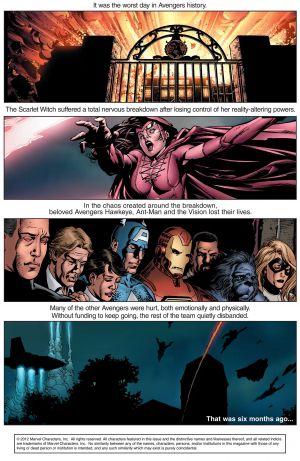 The New Avengers is a spin-off of the long-running Marvel Comics series The Avengers. The first issue, written by Brian Michael Bendis and penciled by David Finch, was dated January 2005 but appeared in November 2004. Finch penciled the first six issues and issues #11-13. Succeeding pencilers with multiple-issue runs include Steve McNiven, Leinil Francis Yu, Billy Tan, and Stuart Immonen. The roster at first comprises Luke Cage, Captain America, Iron Man, Spider-Man and "Spider-Woman" (Veranke). Later stretches included the mutant X-Man Wolverine, the unstable and godlike Sentry, and the deaf ninja Echo, in the guise of Ronin. The team itself was not named the "New Avengers" within the series. A splinter group of Avengers that chose not to comply with federal superhuman registration, the team considers itself the authentic Avengers. A concurrent government-sanctioned team gathered in the sister series The Mighty Avengers. This series launched in early 2007 and was itself supplanted by a different government-sanctioned team in the series Dark Avengers, which was launched in late 2008. At this time the team welcomed Clint Barton (recently returned from the dead) as Ronin, as well as Doctor Strange and Iron Fist.