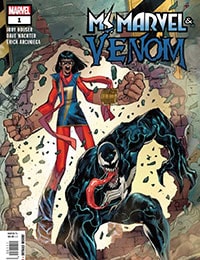 DEADLY SYMBIOSIS!<br/>VENOM is on the hunt...but who is hunting Venom?!<br/>MS. MARVEL teams up with Dylan Brock, the new wicked web-slinger on the block, as a scheme to harness the symbiote rears its ugly head!<br/>The first Venom/Ms. Marvel partnership is also the concluding movement of the super hero symphony of the summer, as we reveal the connection between WOLVERINE, MOON KNIGHT and VENOM, and KAMALA KHAN'S team-up uncovers the larger plot behind it all - you're not going to believe who's pulling the strings!