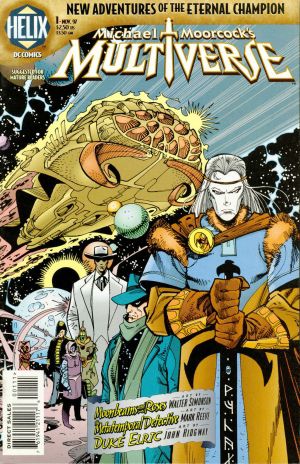 Each of the three tales is set within a distinct aspect of the multiverse that Moorcock has built up over four decades in his novels and short stories about the Eternal Champion: .......the Multiverse isn't a globe. Time isn't cyclic. There is no real linearity. The Multiverse is a tree root and branch, a living organism. A creature. Like me. Forever adapting and changing. Like us, made up of spheres, but it's not itself spherical. We've evolved beyond the merely spheroid, I hope...... — Jack Karaquazian, Michael Moorcock's Multiverse (Moonbeams and Roses) #10, p.2, Aug. 98 The first tale I: Moonbeams and Roses is set in the Terminal Cafe, in present day Biloxi, Mississippi where Jack Karaquazian indulges in meta-universal games of chance with an assortment of leading characters from the Moorcock novels, together with Moorcock himself, and later, artist Walter Simonson. Somewhat impenetrable, the story tracks the adventures of Rose, who originally appeared in the novel The Revenge of the Rose (1991) and Sam Oakenhurst, hero of Blood (1995) and subsequent novels [1] as their progress towards Silverskin is manipulated at each turn by the unseen players of the Game. II: The Metatemporal Detective is set in the inter-war period and follows Sir Seaton Begg and his off-sider Dr Taffy Sinclair from the eponymous novel sleuthing an array of crimes Sherlock Holmes-style, including the murder of Adolf Hitler's incestuous girlfriend and niece. The final tale III: Duke Elric features the popular albino emperor Elric of Melniboné displaced from his fantastical world and transported to the Europe and the Middle East of 1000 AD. Here he pursues a quest to uncover certain artifacts which will allow him freedom to confront King Silverskin and to return to his home world. The three plot-lines converge in a single narrative in the final issue of the title, The Harmonies of Chaos (drawn by Walter Simonson) as Elric confronts the Silverskin and its connection to Moorcock's multiverse is revealed.