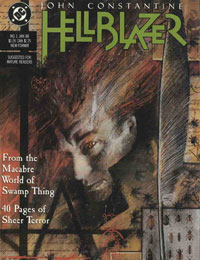 John Constantine finally gets his own series in this premiere issue of the now well-loved Hellblazer title, in which he must help quell a terrible, mysterious hunger that is consuming the citizens of New York City. Constantine seeks the help of various friends and contacts after finding his old friend Gary Lester in his bathtub, complaining of withdrawal and covered in bugs. He learns that Gary brought a demon named Mnemoth back with him from a trip to Africa, who was persuaded to unleash it once he returned home. He eventually comes face to face with Mnemoth, and the issue ends with a cliffhanger as Constantine manages to escape, leaving a heroic priest to certain death.