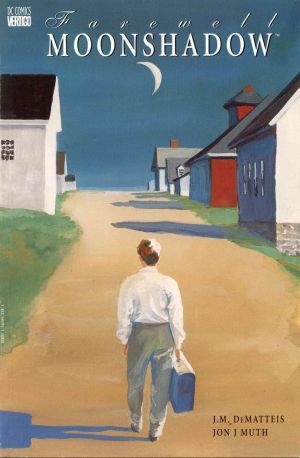 Serves as the epilogue of sorts for the 12 issue series, Moonshadow, which was originally released through Marvel's Epic line, and then republished under DC's Vertigo. Most of the book consists of typewritten pages on the left-hand side and painted splash pages on the right. This stand-alone story plays more with the idea that Moonshadow is an unreliable narrator and may have made up some or all of the story presented in the original Moonshadow series. It begins with Moonshadow as an old man at his birthday party, surrounded with objects that hint at the characters and objects from his earlier "Journey to Awakening," as he often described it. It is a giant party with many people. He sits in a wheelchair with his cat Frodo, still alive, on his lap. Then he remembers (or makes up) the story of his young adulthood, some years after the events of Moonshadow. He returns to the planet Pillbox, where he had lived with Gaylord and his friends many years before. He is still (or once again) melancholic. He starts up a storefront as a tinker, and lives quietly for some time, dreaming of his many dead friends and family. However, his old friend Bettina, now a young woman herself, recognizes him. They both start voyeuristically stalking each other without the other knowing. Finally her Aunt Marigold Flimflam forces them to actually talk to each other and admit their love. They are soon married. Back at the aged Moon's birthday party, he sees an old woman who gives him a kiss and a snowglobe showing a happy family. The woman's identity is unknown but she could be Bettina. The younger Moon and Bettina have children, and live a life of love and peace, although he still has a certain existential yearning. Then one day a freak storm kills his whole family. Moon is once again bereft of all his loved ones. He sinks into a despair deeper than any before. He tries to kill himself multiple times, but each attempt fails, as if it's impossible for him to die. He lost all his money and was put in jail and insane asylums. Eventually he accidentally gambled himself to great riches once more, and ran a house for social outsiders. His life was full of random acts, like those of his G'L-Doses father. He helped those in need, and especially took in women and children, but he seemed to have lost his soul. Then one night a G'L-Doses appeared and returned his mother's flute to him, which had always been a symbol of joy and life. He embraced its hope, and played it like the Pied Piper, leading a line of the hopeless behind him, bringing them to a new spot where he was able to bring a new life of hope to all of them. Once again at the aged Moonshadow's party, he blows out his cake's candle and dies. At that moment, he transforms into a G'L-Doses and, with Frodo sitting on his head, floats up to merge with the moon.