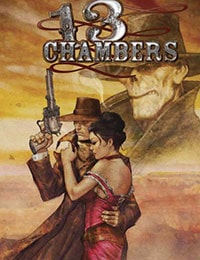 After Abraham Lincoln’s death, one of President Jackson’s first orders was to disband the 13 Marshals: a secret group of lawmen operating with complete federal authority. Set in a fantasy 1860s, 13 CHAMBERS is the story of the 13th Marshal and his Presidential mission to retrieve all 13 Territory Peace Keeper pistols and return them to Washington D.C. for retirement. All is well until he reaches a small town in four corners where an insane mining baron named YORK has killed the 12th Marshal and stolen his pistol. The 13th Marshal must get the pistol back at all costs and bring York to justice... or die trying.